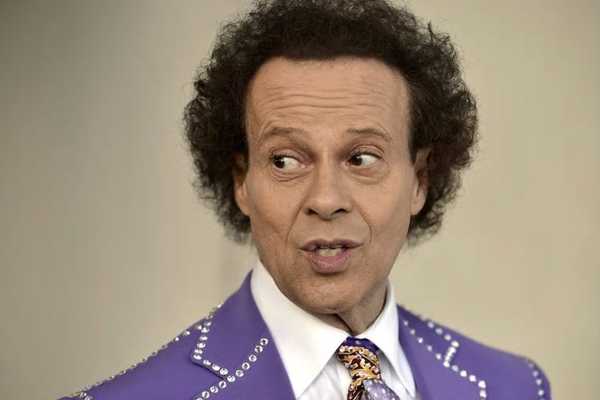 In a libel complaint, the fitness star says the publication knew its source wasn't credible and that he has “a legal right to insist that he not be portrayed as someone he is not.”

Richard Simmons isn't missing. For those looking for the fitness guru, try Los Angeles Superior Court, where Simmons is now standing up for truth and privacy in a huge libel lawsuit against the National Enquirer, Radar Online and American Media, Inc. Simmons is targeting a series of “cruel and malicious” articles published between June 2016 and March of this year that suggested he was transitioning from a male to a female, including reports of “shocking sex surgery,” breast implants, hormone treatments and consultations on medical castration.

The complaint filed on Monday paints the tabloids' conduct as “particularly egregious,” a cynical calculation that Simmons wouldn't sue because he wouldn't want to appear as frowning upon the act of transitioning from one gender to another.

“National Enquirer and Radar Online have miscalculated,” reads the complaint, a copy of which was obtained by The Hollywood Reporter. “The National Enquirer and Radar Online have cheaply and crassly commercialized and sensationalized an issue that ought to be treated with respect and sensitivity. Principles of freedom of speech and press may protect their prerogative to mock and degrade the LGBTQ community. But freedom to speak is not freedom to defame. Mr. Simmons, like every person in this nation, has a legal right to insist that he not be portrayed as someone he is not. Even the most ardent supporter of sexual autonomy and LGBTQ rights is entitled to be portrayed in a manner that is truthful.”

Neville Johnson, the attorney for Simmons, continues, “The law of defamation and false light invasion of privacy exist to vindicate this elemental right. The law protects the right of every person to be treated with decency and dignity, free from the deliberate propagation of falsehoods that have no motivation other than exploitation. It is to vindicate that right, and the rights of all persons to be portrayed with dignity and honesty with regard to their sexual identity, that Mr. Simmons files this lawsuit.

Here, Simmons is bringing the first-ever defamation lawsuit over published reports of a sex change and framing it as a stand for dignity and the right to have a gender identity.

Equally as interesting is Simmons' target — a publication that has routinely annoyed celebrities and has become closely aligned with President Donald Trump thanks to Trump's friendship with its owner, David Pecker. (Famously, Trump wondered last year on the campaign trail why the National Enquirer hadn't ever won a Pulitzer.)

The National Enquirer has employed a peculiar strategy when it comes to celebrity gossip. Since public figures must demonstrate “actual malice” — knowing falsity or reckless disregard for the truth — to prevail in defamation cases, the publication looks to make its reports defensible. A recent Buzzfeed feature about the magazine quoted editorial director Dylan Howard as saying that sources are given polygraph tests and asked to sign a contract testifying the information provided is true. As Buzzfeed puts it, “Ultimately, the actual veracity of the story matters less than the existence of sworn testimony of its veracity.”

But according to Simmons' suit, AMI publications can hardly shield itself from accusations of being reckless. Not when there are good reasons to be dubious about the credibility of a source and not in the face of contrary information.

Simmons admits to retreating from his 40-year career in television and fitness in early 2014. His absence from the media spotlight garnered attention itself, including from the celebrated podcast, Missing Richard Simmons. Others may have looked to capitalize on the situation.

“Starting from around May 2015, Mauro Oliveira, an individual who has blackmailed, extorted and stalked Mr. Simmons for several years with the intention of destroying the career and reputation of Mr. Simmons, contacted several press outlets, including the National Enquirer and Radar, and offered information on Mr. Simmons' disappearance in exchange for a fee,” states the complaint.

Oliveira allegedly told the publication different stories about Simmons during multiple contacts. According to the complaint, the National Enquirer was told on one occasion that Simmons' absence was due to him being held hostage by a housekeeper who engaged in witchcraft. On another occasion, it was a sex change.

“All of these assertions were untrue, and were merely attempts by Mr. Oliveira to gain a profit in exchange for providing a false narrative about Mr. Simmons' leave of absence,” continues the complaint. “While pitching around these ideas, Mr. Oliveira was simultaneously blackmailing Mr. Simmons, sending him emails and threatening to destroy his reputation with damaging press coverage unless Mr. Simmons paid Mr. Oliveira to stop.”

As the National Enquirer began preparing its story about a sex change in June 2016, according to the court papers, the publication provided Simmons' publicist, Tom Estey, a copy of the unpublished article for review. Estey warned AMI's general counsel that they should “be prepared for a lawsuit.”

Nevertheless, allegedly using Oliveira as its sole source, the National Enquirer published on article on June 8.

“The cover of the article, 100% entirely dedicated to the false story about Mr. Simmons' transition, included an old image of Mr. Simmons from 2013 (before his disappearance), dressed in costume as a female, which he has done openly over the years consistent with his well-known and longstanding burlesque-style entertainment persona,” states the complaint. “Accompanying the image of the 2013 photo of Mr. Simmons was a large bold headline, taking up half of the cover page, proclaiming ‘Richard Simmons: He's Now a Woman!'”

Radar is said to have followed this up with five articles itself recycling information.

Just two days later, after the National Enquirer's initial story, Oliveira is said to have recanted his story about Simmons' gender transition via an email to Simmons and his manager. The email stated that Oliveira had been “misrepresented and betrayed and that such allegations were pure fabrications by others not [himself.]'”

Oliveira allegedly demanded money, and said that if Simmons paid him, he would be prepared to “go on record to discredit the story and defend Richard Simmons.”

As the complaint (read in full here) puts it, “This email — part of a longstanding pattern of harassment of Mr. Simmons by Mr. Oliveira — further demonstrates that Mr. Oliveira was obviously not credible, and any reliance on him as a source was reckless and malicious.”

Despite Simmons' denials, the Olivera email turned over to AMI and several more follow-up threats and demands for retractions, the National Enquirer “doubled-down” with a new article on June 15 repeating the sex-change allegation. Radar would post a story as late as March 22, 2017, stating that Simmons was “the latest Hollywood star to secretly undergo a sex change” and that he has “opted for a breast implant surgery, hormone therapy, and a host of other invasive changes to create the transformation the Enquirer reported.”