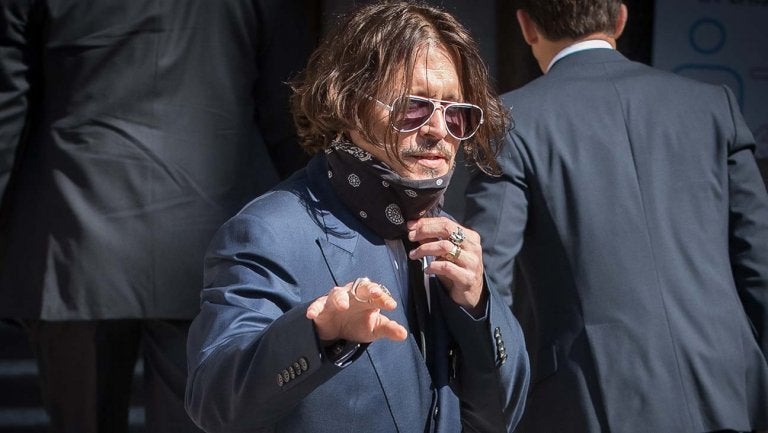 The star begins a libel trial against a U.K. tabloid that called him a “wife beater.” No matter the verdict, he's destined to lose.

If there's a single word to describe Johnny Depp's status at the moment, I'd go with zugzwang, which chess aficionados know to be the moment when a player basically gets cornered into making a move that will inevitably lead to an even more inferior position. On Tuesday, the star actor appeared in a London courtroom to take on the U.K. publisher of The Sun for characterizing him as a “wife beater” in the print edition of an April 27, 2018, online article.  Unfortunately for Depp, it seems to be a defamation trial that's a no-win situation.

Depp appears to think that success is achievable at a proceeding that will last several weeks and feature all sorts of inside details about his life plus celebrity friends including Paul Bettany and Winona Ryder. Depp is claiming that during his tumultuous marriage to Amber Heard between 2015 through 2017, he didn't actually throw a phone at her, slap her across the face, and grab her by the hair, as she once testified in a deposition during one of the nastiest divorces in Hollywood history. Perhaps Depp will play audio tapes in an effort to claim his ex-wife was the abusive one in this stormy relationship. It won't matter because there's really no reversing the damage that Depp has incurred these past few years.

That should have become obvious on June 26 when it was revealed that Disney was working on a new Pirates of the Caribbean, this time featuring a female-fronted cast led by Margot Robbie. In other words, at the exact moment when a U.K. judge was deciding on whether to actually proceed with Depp's libel suit after the actor's attorneys breached a court order by failing to turn over a series of text messages concerning the procurement of drugs, Depp may have lost his most lucrative role. A source tells The Hollywood Reporter that Jerry Bruckheimer would like to at least nod to the popularity of the Captain Jack Sparrow character in the coming film if the controversies die down, but at this point, Disney is resistant. Depp is too controversial. (Disney didn't respond for comment.)

So Depp will pursue a favorable verdict and a nominal damages award from a trial that's playing out under English defamation standards — in other words, where the burden of truth is on the news publisher to establish rather than Depp. Meanwhile, over the next few weeks, amid an international pandemic, Depp will surely incur additional reputational harm from these prying court proceedings, the impetus for which was a column questioning J.K. Rowling's defense of Depp being cast in the adaptation of her book Fantastic Beasts and Where to Find Them. It's hard to sue one's way out of controversy.

Given this situation, it's no wonder Hollywood insiders are increasingly puzzled over Depp's moves. I spoke to several industry attorneys and publicists, all of whom offered some variation on the theme that the public would likely have forgotten Depp's years-old troubles but for court actions that keep reminding everyone.

“One of the things you're always balancing is, how do you respond to accusation? Do you add more fuel to the fire or let it dissipate?” asks Howard Bragman, a longtime crisis manager in the entertainment industry.

Says Neville Johnson, an attorney who has previously brought suits against tabloids but questions the star plaintiff's wisdom here: “Depp doesn't need the money [from any damages award] and it is not going to enhance his reputation.”

How did Depp find himself at the point of zugzwang? More and more, one has got to question Depp's reliance on attorney Adam Waldman. Depp has many attorneys, and the others seem to be the ones actually doing the hard work in court, but Waldman has become Depp's mouthpiece and also looks to be the lawyer who has emerged as the star's svengali of sorts.

A search on Google (where he referred this reporter instead of agreeing to an interview) yields some clues, though hardly anything definitive. Unlike most attorneys, Waldman maintains no bio page these days. A few years back, Waldman's D.C.-based Endeavor Group did have a working website, but no longer. A trip to the Internet Archive reveals that Waldman once took credit for overseeing “all corporate aspects” of the landmark antitrust trial United States v. Microsoft, being the “principal architect of several ground-breaking initiatives” including the Center for Global Development, and even predicting the 2009 financial crisis with a “seminal law review article” authored all the way back in 1993. That would be when he was a student at American University, which did indeed confirm his graduationin 1995.

Waldman, according to reputable press reports, seems to have been involved in various dealings with the Kremlin, Russian oligarch Oleg Deripaska, and Wikileaks founder Julian Assange. He had a lucrative ($40,000 per month) lobbying contract with Deripaska, was registered as an agent for the Russian government, visited Assange nine times in one year at the Ecuadorian embassy in London, apparently in connection with efforts to strike a deal with the DOJ, and more. His associations have become fodder for intrigue among reporters and lawmakers even if there's a lack of public evidence of anything more than Waldman having a talent for landing recurring, if minor, roles in real-life Russian political dramas.

I'd say that Waldman's foray on the periphery of the industry hardly matters, except that it appears Depp is publicly burning bridges with the sort of abandon that one hardly ever sees among big Hollywood stars. Depp's recent legal pursuits include batteling his former money managers over the disposition of hundreds of millions of dollars; splitting with longtime transactional attorney Jake Bloom; and, of course, continuing to face off against Heard again and again and again, including in a separate defamation suit against her over an op-ed she wrote for The Washington Post. That latter case is currently scheduled for trial in Virginia in January 2021.

That's a lot of legal work, and Waldman appears to have taken on a central role. As Stephen Rodrick put it in an often-cited Rolling Stones Article, “Waldman seems to have convinced Depp that they are freedom fighters taking on the Hollywood machine rather than scavengers squabbling over the scraps of a fortune squandered.”

Waldman is also conducting a public experiment on social media. In a nutshell, do tactics of preaching to a choir of a small number of Twitter accounts achieve anything outside of politics? Most attorneys don't pick fights with the media during a big case, particularly in the weeks before trial. Not Waldman. For weeks, he's been goading reporters at The New York Times who apparently are investigating him, and he's been whipping his followers into a frenzy with attacks on Rodick, Variety (“Saudi Arabia's Variety”), THR (“too much corruption”) and other journalists and news publications. (That said, Waldman may not be above going to his own favored media outlets. Depp's attorneys have been accused in court papers of leaking to outlets like The Blast, which seems to be to Depp what Fox News is to Trump.) He's also litigating on Twitter, presenting evidence procured from Depp's cases, and overall, exhibiting highly unusual behavior for a working attorney.

To what end? That one is very hard to answer. But if anyone in Hollywood is ready to take on “fake news,” the ticket of Depp-Waldman should be deemed real contenders.

In the era of #MeToo, allegations of misconduct get attention — and deservedly so — but some newsrooms have traditionally made a distinction between behavior in the workplace and domestic conduct, with the latter being perceived as tabloid fodder. This time, though, an ugly divorce proceeding has transformed into something quite more.

On July 7, Depp himself took the witness stand and accused Heard of being sociopathic, a narcissist, and completely emotionally dishonest. He insisted her “sick” claims of abuse are untrue. And in opening statements, his attorney David Sherborne said, “This is not a case about money. It is about vindication.”

Depp,in fighting a battle against an unflattering headline, is merely going to draw more attention to TheSun‘saccusation that he's a “wife beater,” especially once Heard gets on the witness stand. At the end of it all, no matter the verdict, this trial will likely do nothing to tamp down the controversies that have tarnished his career. He's elevated a tabloid columnist's random musing into something that's going to be covered by serious news outlets for weeks, months, years on end.

For that, Johnny Depp should regain his senses and fire his lawyers.

Vindication ain't possible. The damage is done. That's the only thing a successful libel claim shows.