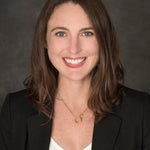 Melissa Eubanks is a Senior Counsel at Johnson & Johnson