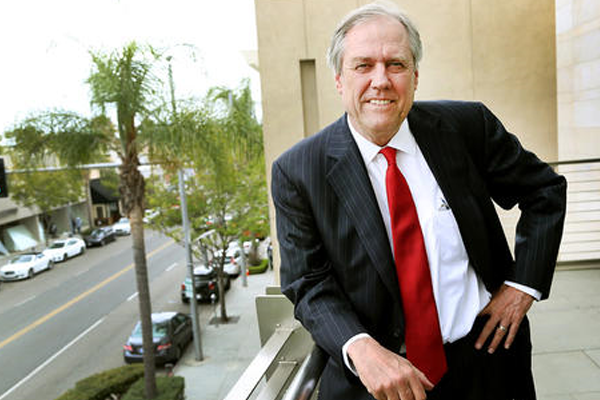 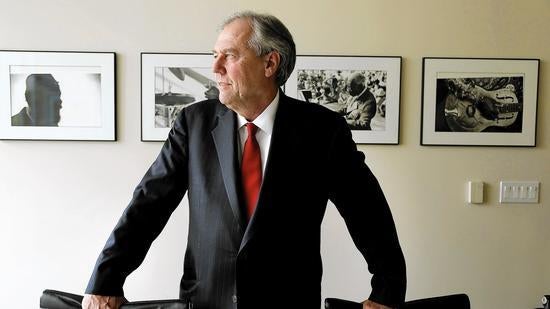 Lawyer Neville Johnson has shone a light on the opaque bookkeeping practices of Hollywood studios and record companies and how they share profits with talent. “The companies are ruthless and rapacious and are going to do everything that they can to squeeze profits, and that comes at the expense of talent,” he says. (Kirk McKoy / Los Angeles Times)

He's one of the most feared litigators in Hollywood. Over a four-decade career, Neville Johnson has wrangled more than $350 million for actors, writers and other clients he contends were shortchanged their fair share of royalties and profits.

Johnson has taken on studios and entertainment unions alike, earning a reputation as a pugnacious attorney who never shrinks from a fight.

“He's kind of the go-to guy if you feel you've been screwed by your agent, your studio or your network,” says writer-producer Michael Elias, whose credits include “The Jerk” and the sitcom “Head of the Class.” “He's not afraid to take on the studios.”

Many lawyers can be “intimidated by the power of the studios,” says attorney Paul Kiesel, president-elect of the Los Angeles County Bar Assn. “Neville Johnson is many things, but intimidated is not one of them.”

Hollywood accounting has long been notorious as an impenetrable dark art. In one famous case, humorist Art Buchwald accused Paramount Pictures of stealing his idea for the hit movie “Coming to America” and depriving him of the profits. Paramount countered that the studio earned no net profit on the film, even though it made $288 million at the box office.

Johnson, 65, has continued in that tradition, shining a light on the opaque bookkeeping practices of studios and record companies and how they share profits with talent — although most of his clients tend to be lesser-known actors, writers and songwriters.

“The companies are ruthless and rapacious and are going to do everything that they can to squeeze profits, and that comes at the expense of talent,” he said in an interview from his Beverly Hills office.

Such heated rhetoric comes naturally to Johnson, who nonetheless commands a healthy respect among attorneys representing the studios. “If I said to them I've got a new case that Neville brought, their attitude is ‘We're in for a fight, this is serious stuff,'” said Los Angeles attorney Gary Bostwick, who has represented Fox, Sony, NBC and CBS.

That junkyard dog reputation was burnished in May when Johnson and his partners settled a $26-million class-action lawsuit with Universal to compensate actors, writers, directors and others who alleged were shortchanged over profit participation deals on movies released before 1981.

The settlement could be the first of several multimillion-dollar agreements with major film studios over home video royalties. Similar class-action cases are pending against Paramount Pictures, 20th Century Fox, Warner Bros. and Sony Pictures. Johnson also is representing Sony employees who are suing the studio over the breach of privacy caused by last year's computer hack.

The cases could be lucrative for Johnson, who earns most of his income on contingency payments, which can amount to as much as 50% of settlement amounts.

He went to work for prominent music attorney Owen Sloane, representing such performers as Fleetwood Mac's Stevie Nicks and Lindsey Buckingham. His work with musicians inspired him to write and perform his own country-folk songs, which he regularly performs at clubs and events around L.A. 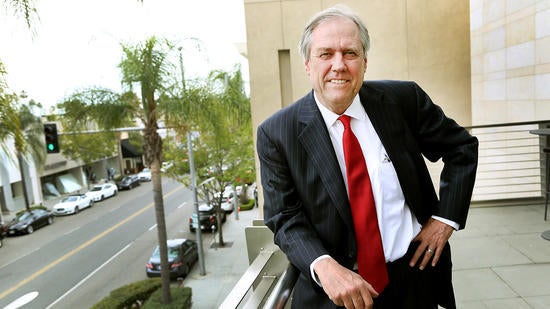 An L.A. native, Neville Johnson began his career as a music attorney in the mid-1970s after graduating from Southwestern University School of Law. (Kirk McKoy / Los Angeles Times)

By 1978 he launched his own law firm and picked up big-name clients, including Yoko Ono, serving as her principal lawyer in the early 1980s.

Beyond handling contracts, Johnson assisted the heirs of artists such as Buddy Holly and Ricky Nelson in collecting royalties from record labels. He also helped put together a class-action lawsuit over unpaid digital royalties on behalf of artists such as Ron Tyson of the Temptations and Dave Mason of Traffic. Universal Music Group recently agreed to pay up to $11.5 million to settle.

Johnson's Eureka moment came in the mid-1980s when members of Mitch Ryder & the Detroit Wheels asked him for help to collect royalties from “Devil with a Blue Dress On” and other hits from the 1960s and 1970s. They won a six-figure settlement from Rhino Records.

“I was appalled,” he says. “Everybody else made money except the artists.”

Since then, Johnson has mainly focused on taking the studios to task.

When actor Jack Klugman, pictured, suspected he was being cheated out of millions of dollars from his work on the decades-old TV crime series “Quincy M.E.,” he turned to Neville Johnson. (Universal Studios Home)

Klugman sued NBC Universal in 2008, contending he was entitled to 25% of the “net profit” from the show. NBC Universal provided him with an accounting statement that the series lost $66 million from 1998 through 2006, the complaint said.

The case was settled two years later; the terms were undisclosed. But Johnson continued his fight with Universal. In 2011 he filed another lawsuit against Universal on behalf of TV producer Glen Larson, alleging the studio withheld millions of dollars in profits from hit TV shows he created, including “Knight Rider” and “Magnum P.I.”

“It's Hollywood's version of being a sharecropper,” the lawsuit states.

Universal countered that Larson was well-compensated for his work on the studio's shows and did not conduct an audit to support his claim.

Other clients reached out to Johnson with similar complaints. Among them was a business manager representing a well-known movie actor who he suspected was being cheated out of millions of dollars in royalties from home video payments.

Johnson hired a forensic auditor to review the net profit statements of the actor. The auditor confirmed that the studio was indeed shortchanging the actor by millions of dollars, he said.

Johnson and his team spent the next six months examining the pay statements of other actors, writers and producers. They found a similar pattern.

“We determined it was a widespread practice,” he says. “It was a Hollywood secret.”

In a series of class-action lawsuits filed in January 2013, Johnson's clients alleged the studios consistently underpaid home video royalties. The clients included filmmaker Stanley Donen, who sued Fox over his 1975 movie “Lucky Lady,” and the trustee of the late actor Charles Bronson, who sued Sony over the 1975 film “Hard Times.”

The suits allege that studios have calculated profit participation amounts based on 20% of home video revenue instead of the full 100%. The practice dates to the advent of the VCR in 1980s, when studios would pay independent companies to produce and distribute VHS copies of their films and receive 20% of the revenue.

After studios opened their own home distribution divisions, they continued calculating the profit participants' earnings from 20% of the home-video revenues. The studios have argued that royalty payments were proper and based on longstanding industry practice. But Johnson says his clients never agreed to the provision. 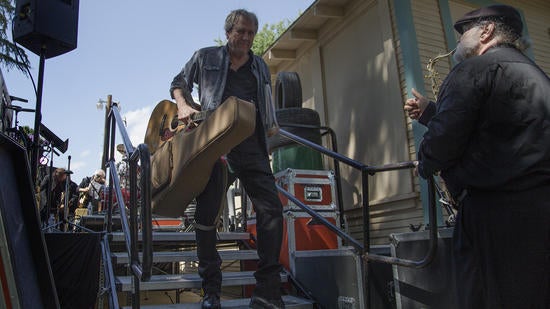 Why did it take so long for the discrepancy to come to light?

Johnson cites various reasons: pay statements make it hard to decipher how net profits are calculated; disputes over profit statements are handled through secret arbitrations and auditors must sign strict confidentiality agreements; and many actors, writers and directors are loath to speak out for fear of being blacklisted by their employers.

Johnson also takes pride in shining a light on the obscure royalties known as foreign levies, which are special taxes levied in foreign countries to compensate authors for the reuse and copy of their work.

In 2005, he brought a class-action lawsuit against the Writers Guild of America, West, alleging the union was improperly holding on to money that belonged to writers. Guild officials disputed the allegation, citing the difficulty of tracking down recipients, many of whom are deceased. Similar cases were brought against other unions, including one filed by “Leave It to Beaver” star Ken Osmond against the Screen Actors Guild.

“They had all these millions of dollars sitting in the bank and gathering interest, and if nobody forced them to do something it wouldn't have gotten done,” Osmond says. “They were high and mighty and he [Johnson] just knocked them down a peg.”

The cases were subsequently settled. The guilds denied wrongdoing but vowed to improve the distribution of funds. They have paid out more than $200 million in foreign levy funds to members.

Some union members, however, were unhappy.

“The job was left unfinished,” said writer-director William Richert, the lead plaintiff in the writers guild case. He complained the settlement did not have enough teeth to ensure writers would get paid.

“We did the best we could, and it was approved by the court,” Johnson says. “Two-hundred million dollars has been paid out. What exactly did I do wrong?”

On a warm afternoon in Bakersfield, Trevor McShane clasped the microphone and introduced an original composition called “There's No Me and You.”

“It's a weeper,” the denim-clad singer warned the crowd of 50 sitting in plastic chairs outside the Kern County Museum.

“Give me back my love, the one you stole from me,” he crooned with a slight Elvis vibrato.

The mellow balladeer onstage at the Bakersfield Rock & Country Music & Art Festival a few weeks ago was in fact Johnson. He uses the stage name McShane — a tribute to his Irish ancestry — because he doesn't “want people to misinterpret my intention to be a full-time attorney.”

A longtime guitar player, Johnson began writing and recording his own Americana-style songs when a client encouraged him. He's not the only prominent Hollywood attorney with artistic pursuits. Skip Brittenham writes graphic novels and Bert Fields has penned novels as D. Kincaid.

Along with performing, Johnson writes nonfiction books, love poems and songs. He and his wife, Cindy, a former actress turned lawyer, own a company that has published several books, including one he wrote on legendary basketball coach John Wooden and his “Pyramid of Success” philosophy.

“I loved learning about him, and that's why I did it,” Johnson said. His greatest passion, though, is music. Johnson has released several CDs and regularly performs country-folk and blues tunes at clubs with his nine-member band, several of whom are professional musicians.

“The legal business is fraught with tension and conflict, and this is not,” he said after performing nearly a dozen songs in Bakersfield. “It's a tremendous artistic release.”